“I threw the dog’s leash towards my husband and sprinted awkwardly over a short hedge and tripped across the front lawn towards the brick steps leading to the landing.  My mind was racing; the sounds emitting from the child were totally freaking me out.  My mind was in overdrive.”

The other day, my husband and I were walking our dog down the beautiful tree-lined street we live on in Ottawa, Ontario.  A slight wind made the day seem much colder than the temperature displayed on my cell phone.   We were bundled up against the wind and walking slowly so as not to out-pace our dog Chico, who was stopping and sniffing every blade of grass on the pristine green lawns we lazily meandered past.

As we rounded the corner of our block, we could hear a child crying. 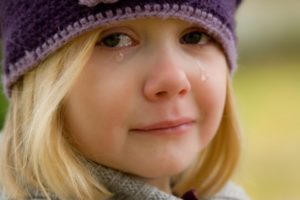 The sound was faint, at first, but with time and footsteps, the child’s cries became strong and fluctuated from a loud scream to a slight whimper then back to hysterical wailing.  Obviously, as parents and grandparents, the sound was disturbing.

“What on Earth?” I wondered, looking at my husband.  “That sounds pretty serious.”

We sped up our walk in the direction of the wailing we heard, dragging our old dog along at a stride he was not happy with.  In the distance, we could now see a small figure wailing on the porch of a home.  Her hands were flailing about and she was throwing herself pitifully against the railing near the front door.

“Mommy!  Help, Mommy, help!” the small creature yelled into the air.  “Where are you Mommy?  Please…I need you Mommy, NOW!”

I threw the dog’s leash towards my husband and sprinted awkwardly over a short hedge and tripped across the front lawn towards the brick steps leading to the landing.  My mind was racing; the sounds emitting from the child were totally freaking me out.  My mind was in overdrive.

Why was she screaming?  Was the child’s mother injured inside the house?  (Perhaps a diabetic parent had gone into a coma.)  Was the child a victim of some horrible abuse?  (Had she escaped from the hands of a drunken neighbor. or worse, a house of horrors like the one I had recently read about in People Magazine?)  Had the poor child been assaulted and then abandoned by an uncaring caretaker?

Okay, I admit it.  I tend to over-react. Honestly, when my brain gets going, my imagination has no limits.

This is my dad’s fault.  When I was a kid my dad read out loud every gruesome newspaper headline and story to me and my siblings over breakfast.  His daily orations were meant to warn us, to protect us from the bad things that can happen to little children if they are not careful.  His intentions were good.  But, in fact, he scared the hell out of me and left my brain imprinted with the idea that the world was a pretty scary place.  Between my dad’s terrifying tales and what I saw on television, I was inundated with a daily double dose of disasters.  All that, plus the fact I’m a bit of a mystery series TV junkie, has turned me into an overly anxious adult.

Well, I see a glass as half full … of poison or at least rotten milk.  Thanks, Dad.

“What’s a matter, sweetie?” I called out to the little girl, as I stumbled to my knees, then up towards the front door.

I hugged the crying child as I peppered her with questions.  “Are you hurt?  Were you left home alone?  Are you okay?   Where’s your mother?”

I was freaking out. My hands were shaking and I was almost afraid to hear the child’s replies. (Let’s just say I’m not the best person to call in an emergency.)

The child started to calm down and began to explain, between deep breaths and big sobs, the source of her dilemma.

“My mother is gone!”

Now I’m thinking that the mother is dead or has been dragged away from the home by a knife-wielding intruder.

“Where?  Where has your mother gone?” I asked in as calm a voice as I could manage in my mental state.  I was already imagining the perp (that’s detective talk for perpetrator) as someone I’d seen in a Law and Order episode a few nights before.

“She went that way.” The girl said, pointing in the opposite direction.

“Did she leave by herself?”

So now I immediately think hostile divorce and abusive husband and envision the mother being pulled down the street against her will….possibly by her hair.

I needed more answers.  I had to ask more questions.  (Good investigators ask lots of questions.)

“Are they coming back?  Were you instructed to stay put? Can you get into the house?” I could see by the kid’s expression I was moving way too fast for her to follow.

But I couldn’t stop myself.  My mind was churning.  I wished I had a note pad and pencil.  Good detectives take copious notes.

“Are you locked out of the house?  Is that why you’re crying?

“No!” the girl screamed back at me, obviously irritated that I didn’t grasp the reason for the depth of her despair.

NOW I was getting irritated. “What is it then?  Why are you crying?”

The little girl stopped crying, put her hands on her hips, got up in my face and yelled, “My mom and dad are out walking.  My laptop battery is dead and I can’t find the charger!”

Just about then, the young girl’s parents came around the corner and waved to their daughter. As she went scrambling off in their direction, I joined my husband who was waiting with our dog near the steps.

“Was there a dead body?” Alan asked with a smirk on his face.

I didn’t answer.  I just looked skyward and whispered into the air, “Seriously, Paula, you need to get a grip on your imagination.”

I think I’ll watch “The Marvelous Mrs. Maisel” tonight.  Perhaps a break from murder mysteries will do me good.